The world map is impermanent. As we drift into the future, here’s what the ground beneath us might look like. 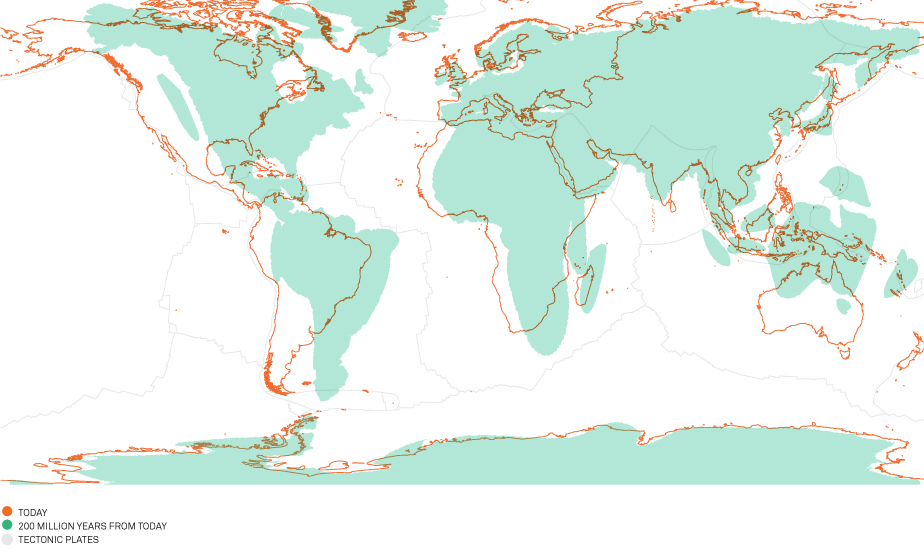 Where will “here” be tomorrow? Geographically speaking, for all intents and purposes, right where it is today. But what about in a million tomorrows—where will here be then?

The theory of plate tectonics posits that the Earth’s crust is made up of large, thick masses called plates. These plates, floating on top of the hot mantle below, shift at a pace so slow it’s hard to imagine. Whole continents drift: More than 200 million years ago, Pangaea, a single super-continent, split, creating the seven continental landmasses we know today.

And as the plates continue moving, little by little, into new, unknown landscapes, it’s unclear exactly how the continents will change. But using what we know about plate motion, we can make some educated guesses.

Today
The orange lines on the map at right are the current continental boundaries. The plates, outlined in gray, are moving at an average rate of approximately 2.5 centimeters a year. That’s pretty darn fast, in the grand scheme of things. Consider this: I’m writing from Washington, D.C. A reader one tectonic plate away—say, in London—will open this magazine when it comes out and find themselves about half a centimeter farther from my home than when I wrote it.

Ten Million Years from Today
The world in 10,002,012 A.D. will appear, in a general sense, the same. Ten million years of 2.5-centimeter creeps and nudges will add up, though, and a few key areas will show dramatic changes. New Zealand will have grown, mostly due to volcanic activity, and the Cook Strait separating the nation’s North and South Islands will be significantly slimmer. The portions of Baja California and the state of California west of the San Andreas Fault will have marched northward, while the rest of North America will continue to distance itself from Europe via the magma bubbling up through the underwater Mid-Atlantic Ridge. Australia will stay Australia-shaped, much to the hypothetical delight of future Australians, but will begin encroaching upon Indonesia. And keep your eyes on India: The subcontinent will approach mainland Asia at an alarming speed.

One Hundred Million Years from Today
By 100,002,012 AD, California will have slid up the west coast, placing Tomorrow’s Los Angeles headquarters about where Bakersfield is now, approximately 110 miles away. Due to upward pressure from Africa, the Mediterranean Sea will be reduced to a series of large lakes. The Arabian Peninsula will sit closer to Africa as well, while the Rift Valley—the cradle of life—will open. The Horn of Africa will become more of a claw. Southeast Asia will have grown tremendously, while Australia will continue its quest northward. At this point, India will be merging with the rest of Asia. The Himalayas will be two or three times as tall, rising higher as the plates clash, forcing earthen material upward.

Two Hundred Million Years from Today
By 200,002,012—that’s 73 billion tomorrows, if you’re keeping track at home—half of California will have separated from the mainland completely. (Victory is ours!) The Inland Empire will have to change its name, as it will include some lovely beachfront property. San Francisco, meanwhile, will be just a hop across an increasingly narrow channel from Vancouver. The Americas as a whole may drift slightly back toward Europe as the Mid-Atlantic Rift’s magma ooze slows down. The Horn of Africa will be closer to Madagascar than to Egypt as Kenya’s Rift Valley continues to separate. Europe, Western Asia, and Africa will form a new supercontinent. India will no longer be a subcontinent but, in a twist, becomes an entirely mountainous region of Central Asia. And Australia will occupy same latitude as Southeast Asia—maybe at the 500-million-year mark they’ll be neck-and-neck with Japan!

How reliable is plate movement?
It’s not. Plate movement is highly irregular. There isn’t a schedule to these things, and just because a plate is going in one direction now doesn’t mean it will move that way forever. Take a look at Hawaii, for example. The Hawaiian Islands were formed by a “hot spot,” a hole in the middle of the Pacific Plate. You can trace the plate’s movement by looking at underwater topography of the Pacific Ocean floor: The Hawaiian Island chain was moving in a northwesterly direction, but at some point millions upon millions of years ago the line of islands shifted, abruptly, into a more or less straight line north. Who’s to say that won’t happen again?

What about climate change? Won’t that factor into the Earth’s appearance, too?
Yes, absolutely. Especially with rising water levels. Those atmospheric factors are distinct from geological factors, though. Here, we’re merely discussing the natural progression of the Earth’s crust.

Why do the continents look like blobs in the future?
Regrettably, I cannot travel into the future and survey the territory for myself. By keeping the coastlines generalized, I can provide the best possible estimates. Also, fjords are hard to get right.

Which areas will we still recognize in 200 million years?
Northern Europe, far from major fault lines and seismic activity, will remain much the same. The east coast of South America and west coast of Africa will also be generally safe. Australia, for all its upward mobility, will retain most of its shape. Antarctica is also likely to stay as-is, but it’s hard to say—there is a lot of seismic activity under all that ice.