Throw Some Glitter Make It Rain

Nikki Darling communes with music in Los Angeles.
Elaine Chernov is one-fifth of Quite Strong and an art director living in Chicago. 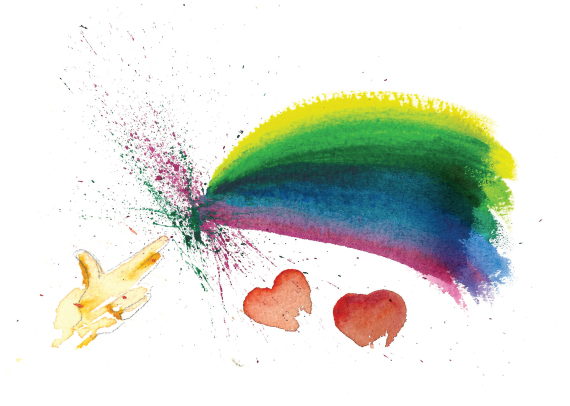 Dawson is removing his bra. Dawson is being objectified. Dawson is being ordered to dance! In the four-minute video for Ke$ha’s hit single “Blow,” Dawson—that is, Dawson’s Creek actor James Van Der Beek—fills a role most often played by pop starlets. He’s a prop. It’s a playful commentary on the difference between being a female sex object and being a female.

This gender role reversal is just one hint at why Ke$ha—the chart-topping but critically reviled pop singer—will likely be a music-industry fixture long after her sugarcoated tunes have disappeared from the charts. She’s known for her euro-tinged party anthems and affinity for glitter and face paint, but behind the scenes she’s quietly been acquiring real experience in the music business. She’s writing her own songs, forging collaborations with a diverse group of artists, and learning how to mix and produce her own work. And Ke$ha isn’t just a party-pop princess; she’s become a hitmaker for other young female stars. She is doing what only a handful of pop singers have succeeded in doing: diversifying her skill set to ensure financial and creative longevity after her career on the stage has faded.

When Ke$ha hit it big in 2009, her music and persona were instantly vilified. “It’s difficult to take anyone who chooses to position a dollar sign in the middle of their name seriously. That’s right. Ke$ha. Shudder,” wrote the British blog contactmusic.com. DListed dubbed her “Ke$hit.” Jezebel announced that “her music is fucking terrible!” But the public disagreed, and she churned out hit after hit.  Her breakout smash, the party anthem “TiK ToK,” reached number one on the Billboard charts, becoming the first number-one hit single of 2010. It stayed in the top spot for nine weeks, longer than any other single that year. More hits followed, from “Blah Blah Blah” to “We R Who We R” to “Blow.” And Ke$ha wrote or co-wrote all of them, as well as the other 13 songs on her debut album.

She went on to write and co-write music for other stars, including Britney Spears (“Till The World Ends”), The Veronicas (“This Love”), and Miley Cyrus (“The Time of Our Lives”). “I just write all the time ‘cause it’s all I can do,” Ke$ha told MTV.

It’s a fair assessment of her strength as an artist. Ke$ha can’t exactly dance. Her voice is perfectly capable of delivering white-rap lines about her appreciation of hipster beards, but not Aguilera-esque vocal gymnastics. And beneath the neon body paint, she looks far more everyday-girl than do her impossibly proportioned peers.

Her total lack of typical pop-starlet attributes has directed her career toward more lasting skills. Ke$ha may have skipped dance class, but she was exposed to the creative and industry end of the business early on. She was raised in Nashville by a single mother, songwriter Pebe Sebert, whose 1978 song “Old Flames Can’t Hold a Candle To You” was recorded and released by Dolly Parton, Hugh Moffatt, and Brian Collins, respectively.

In interviews, Ke$ha recalls living on food stamps and frequenting bars as a child so that she could watch local talent. At 16, she took a songwriting class at her high school, where she also started reading music. She joined a band with her older brother, and soon the two were playing around town. YouTube videos of her performing a cover of Radiohead’s “Karma Police” in a middle school talent show and dancing goofily as a freshman at band camp have made the rounds online. She cites Bob Dylan’s Nashville Skyline as her favorite album, and recently contributed a cover of his “Don’t Think Twice, It’s All Right” to Amnesty International’s Dylan tribute album, an honor she called “a massive deal.”

Ke$ha’s website tells the story of how, before she made it big, she broke into Prince’s house in a crazy attempt to hand-deliver her demo: “She paid the gardener five dollars to let her squeeze herself under his front gate. Then she hiked up the driveway (which was lined in purple velvet), let herself in through an unlocked side door, and rode the mirrored elevator to the third floor where the Purple One himself was jamming with his band. ‘It was kind of awkward,’ she recalls, ‘but who cares, right? So I sat on one of the purple thrones in the room until he noticed me, which he finally did. He was like, “How the hell did you get in here?” …. His security kicked me out, but not before I left my demo CD wrapped in a giant purple bow.’”

Prince never responded, but he’s a fitting role model. In the 1980s he broke from the Motown sound, taking the rock-edged vibe of Ike and Tina Turner and the sexual energy of James Brown and mixing it all with disco. Along with Michael Jackson, he defined modern dance-pop. Jackson, however, relied heavily on a team of songwriters and producers. Prince wrote his own sound.

Ke$ha’s songs have their own signature, too. Punctuated with explosive, top-heavy beats and breakdowns that snap like whips, her music is written to dance to. Lyrically, she sees herself as a character in the music-industry narrative—as one of many young women who were drafted into the world of pop stardom and marketed as sexually uninhibited. But her songs are almost devoid of actual sex. Instead, they celebrate individual hedonism or comment on how other pop singers are using sex to sell their music.

And of course Prince is more than just a songwriter. He’s a producer, and for Ke$ha, that seems to be the next logical step. Her producer Lukasz Gottwald, known professionally as Dr. Luke, has taken her under his wing. He’s brought her in to assist with mixing hits for singers such as Katy Perry and Britney Spears, including the Femme Fatale remix of the Ke$ha-written Spears hit, “Till The World Ends.” But Dr. Luke, who many credit with putting Ke$ha on the map, has a unique relationship with the singer: He takes his cues from her, rather than the other way around. “Ke$ha was the one who told me, ‘Under no circumstance will I have any guitars on the record,’” Dr. Luke told Billboard of Ke$ha’s 2009 album Animal. “That wasn’t really my call. So we made those (songs) without guitars.”

Since then, Ke$ha has become known for her collaborations with musicians more commonly associated with rock ‘n’ roll than with Autotune. Her eagerness to work outside her genre is another sign of musical confidence: She’s willing to step outside her comfort zone. Or perhaps it’s that her comfort zone is much larger than the media originally imagined. She’s brought in Iggy Pop, Sia, Wayne Coyne of the Flaming Lips, and Black Keys drummer Patrick Carney as contributors on her next album.

In writing her own hits, defining her own sound, and pursuing unexpected collaborations, Ke$ha’s got more in common with Prince than she does with Britney. Her pop-star peers Katy Perry and Rihanna both rely heavily on the music industry to mold their images, and while both surely have a say in pushing things in a mutually agreeable direction, ultimately they are not the masters of their brand. They are only one part of building the product. Ke$ha, on the other hand, is exerting control where she can. Not only has she had a greater say in how she crafts her image, her myriad songwriting credits mean her checks tend to have more zeroes. Perhaps this is what the “$” is all about?

Ke$ha’s got more in common with Prince than she does with Britney.

If Ke$ha has demonstrated anything in the past two years, it’s that she’s a good decision-maker. “You have to be patient, you have to do things right,” she said in a 2009 interview with The New York Times. “If you want to be a legitimate artist, it’s more important what you say no to.” Ke$ha does not want you to make her feel like she’s the only girl in the world, and she does not want to squirt whipped cream at you from a bra, but she will write a song about it. As the music critic Ann Powers wrote in 2010, “What makes Ke$ha interesting, though, isn’t the substance of her act. It’s the way she and her producers … refashion the screwball heroine role to suit a new era of aggressive superficiality and libertine self-empowerment.” And that’s precisely why Ke$ha will be in the business long after popular tastes have shifted away from her particular brand of glittery party-girl anthems.

To quote her own lyrics and give them a spin: She builds us up, she breaks us down. Dance to that, haters.